My name is Stephen Alvarez, I’m a photographer. I’ve worked for National Geographic Magazine most of my career, and most recently, I founded a nonprofit called the Ancient Art Archive.

I remember being very young, and someone putting a camera in my hand, and suddenly I went from being inarticulate to being able to say anything I wanted. And it was like you said, it was like a light went off, and I realized at that point that I was going to be a photographer. I didn’t know what it meant, I didn’t begin to think about how you’d make a living being a photographer, but I knew that that was how I was going to express myself my whole life.

Photography for me has always been easy. I’ve never needed someone to explain to me how to make pictures, how cameras worked. I could do that instinctively, and I was always interested in societies, how societies are organized. How do big groups of people work together and not kill each other? How does that work? So religion was the way I went about looking at that. And then photography is the way I explain all of those things.

You get handed stories for one reason or another. They’re kind of like gifts from outside of yourself; someone gives you a story, this is your story to tell. And I feel that’s a real important responsibility when I start on a project, on a story. To tell it as best as I can, because I feel like they’re given to you, they’re gifts. And you need to be careful with the gifts you’re given.

Not too long after I got out of school, I had my first national magazine assignment in 1991. I’d been out of school for a few years, working for other photographers. And one of my mentors in photography, Nick Nichols, was offered a story by Time Magazine that he didn’t want to do. And he said, call my assistant Stephen. So they did, and that was my first story; it was on caves in the south. So I shot that for Time, and then the next story gets a little easier, and the next story a little easier. By 1995, National Geographic had offered me my first story. And after you start working at Geographic, you don’t really want to work anywhere else. I was always interested in really big stories that can take months or years to put together. And that’s the place where a photographer can really thrive.

The last story I did at Geographic was called “The Origin of Art.” And the story was about what art does for us biologically; we are biological entities, and we don’t do anything without a good biological reason. Unless a behavior moves our genes forward, moves it to the next level, to the next generation, we don’t do it. So what is it about art? Because we’re artists. What is it about art that helps us survive? And so we looked at the very origins of art, which the first evidence of artistic behavior is from 100,00 years ago on the Southern Coast of Africa. People began making paint in vast quantities. By 70,000 years ago, 77,000 years ago, we’re carving objects. And by the time human beings expand out of Africa into the rest of the world, we have a complete artistic toolkit that’s baked inside of our DNA. And it’s one of the things that helps us survive, because it helps us work together in large groups. It helps us — it bonds communities together. People aren’t really — as biological entities, we’re not particularly fast. We’re pretty smart. We’re not strong. All we really do well is we work well together in big groups. And art helps us do that.

So the Ancient Art Archive grows out of that last assignment for National Geographic. Usually with a National Geographic story, they’re really long, so they can be a year, two years, three years. And at Geographic, the photographer operates much more like a producer in TV, where you do all of the research. You do your budgets, you get into the field, and these are long and intense processes. And usually at the end of a story, you’re ready to core dump the whole thing and move onto the next project. I got down with “The Origin of Art” project, and I didn’t want to let the subject go. And I saw some of the great works of paleolithic art, and I realized that being in front of them changes you; it makes you into a different person. And I wanted to share that experience with as many people as possible. So I also realized that a lot of the works of art are in danger; they’re in danger from climate change, they’re in danger from population pressure, they’re in danger from religious intolerance. And I thought, I can take the skills that I have as a storyteller at Geographic, and I can apply them to this worldwide story that we tell as a species as we spread out across the world. Because we write down these stories on rocks across the whole world. And I can take that and I want to keep working on the story; I want to help bring that story to as many people as possible. So I started the Ancient Art Archive directly out of that National Geographic story. 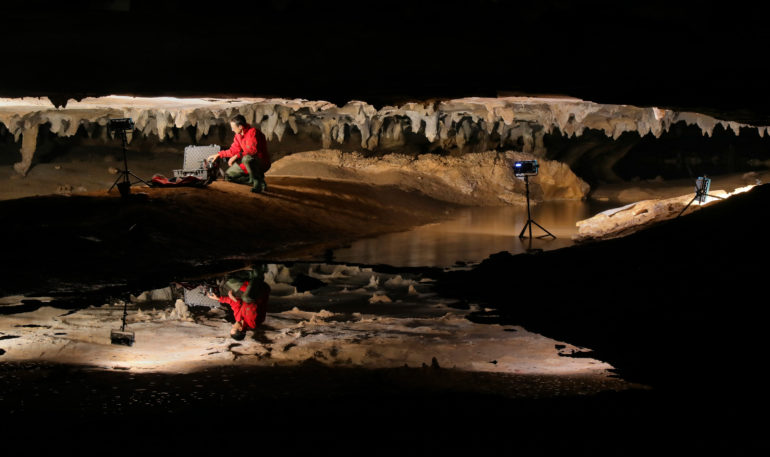 When I first started the Archive, when I first conceived of it, I thought it would be a straight photography project; where I could go to these ancient sites and I would use photography to record the art, and let people experience the power of being in front of it through photography. And it occurred to me very early on in the project that that wasn’t going to be enough. Some of these sites are so hard to get to, or access is so restricted, that photography alone didn’t seem like it would carry forward what I wanted to carry forward. So I thought we should work in VR. And about the same time, photogrammetry programs became more readily accessible. And I realized, we can build these sites in 3D using just photographs and high speed computing. There’s a marriage of these two things that happened. And now, you can not just provide what it looks like, but you can get the nuance of the rock. Sometimes people, these ancient artists, they’re using the rocks in a very sophisticated way that canvas is not flat, it’s wavy. And there are things in the dimensionality that need to be recorded, so 3D modeling is the perfect way to do it.

There are a lot of photogrammetry programs out there, and I settled on Agisoft PhotoScan because it seemed to be well supported, and fairly intuitive for me to use. And it’s an off the shelf product, so if need be, other people can be run my models and get the same results. And then for interpreting the models, I rely on Maya heavily. So right now, the best way to look at the model is to fly a camera through it and show someone the video. So we use Maya for that, and Redshift for rendering, it’s a fantastic program. 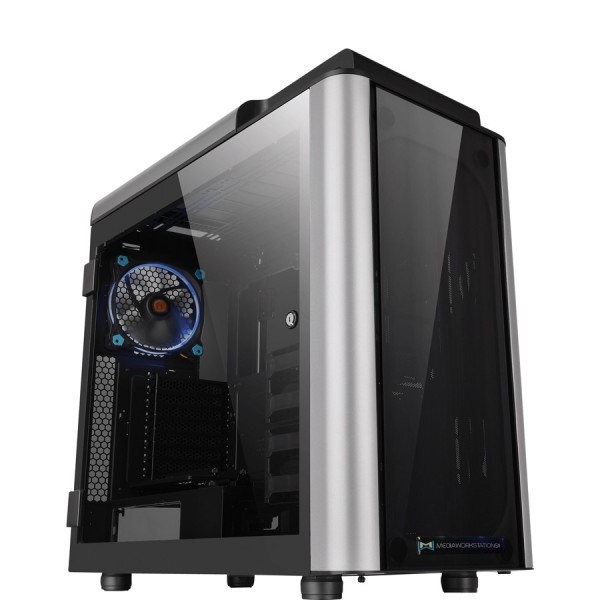 This couldn’t be done without really fast computers though, and really stable computers. And so that’s why I rely on my Mediaworkstations machine. The other day, I have a site I’m working on in Alabama. I shot 1,200 photographs for the 3D model. I put them into Agisoft. I set it to run some automated actions. 192 hours later, it was done. And the model is beautiful.

If the machine is not stable, it’s not going to run for 192 hours; I literally left town and came back to a finished model. And that’s really important, because this is a small shop; we don’t have a lot of people looking at stuff. And to be able to do what I’m doing with such a small footprint. You need really good hardware. It’s true. Never could have done that on my HP machine, holy shit. It would have caught on fire.

Doing the really hardcore computing that’s required to build a dense cloud was just beyond it. And I’d get 20 hours into a model and the machine would freeze. So not only do you not have a model, but you’ve wasted 20 hours. And that happened time and time and time again. And that’s why I called you, Christopher, because I was wondering if doing what I wanted to do, what I knew could be done, was possible.

I got to say, oh my god, you were so much help. That’s the problem.

So ultimately, I bought an i-X with all of the RAM it would hold. It changed the way I work, because I can run things unattended now. Tasks that were really hard, or impossible on a Mac, are now trivial. To work as a visual communicator you need to see what you’re working on. And to have render happen in real time, it was a game changer.

An example of this is we’re working in a cave in Alabama called Unnamed Cave. It has very finely traced engravings on the ceiling; so finely traced that you can’t see them with your naked eye. We modeled the entire ceiling. We should 14,000 images. And we are now finding our orc that is invisible. I started that as a proof of concept model. I just picked a little piece of ceiling and I thought, well let’s see if we can see if anything’s here, and suddenly we’re finding large-scale anthropomorphic figures that are unknown in the iconography of the Southeast. So it’s opening up this world. I’ll show you the stuff, it’s nuts. It is freaking — what we found down there is nuts. I’ve got an anthropomorphic figure that’s six feet tall. It’s a figure with a headdress holding two rattles. And so it’s opening up this world, and it’s that high-speed computing, on a relatively small, modest budget that lets us do it.

The thing that has me continually committed to photography is the image’s ability to convey emotion. And to connect people across all of these things that separate us; across economic gulfs, across a gulf of language, across a gulf of time. Because of the way we evolved, we evolved to understand images. And we don’t need language to communicate, we can communicate with these images. And that still has me, even after 35 years of doing it. 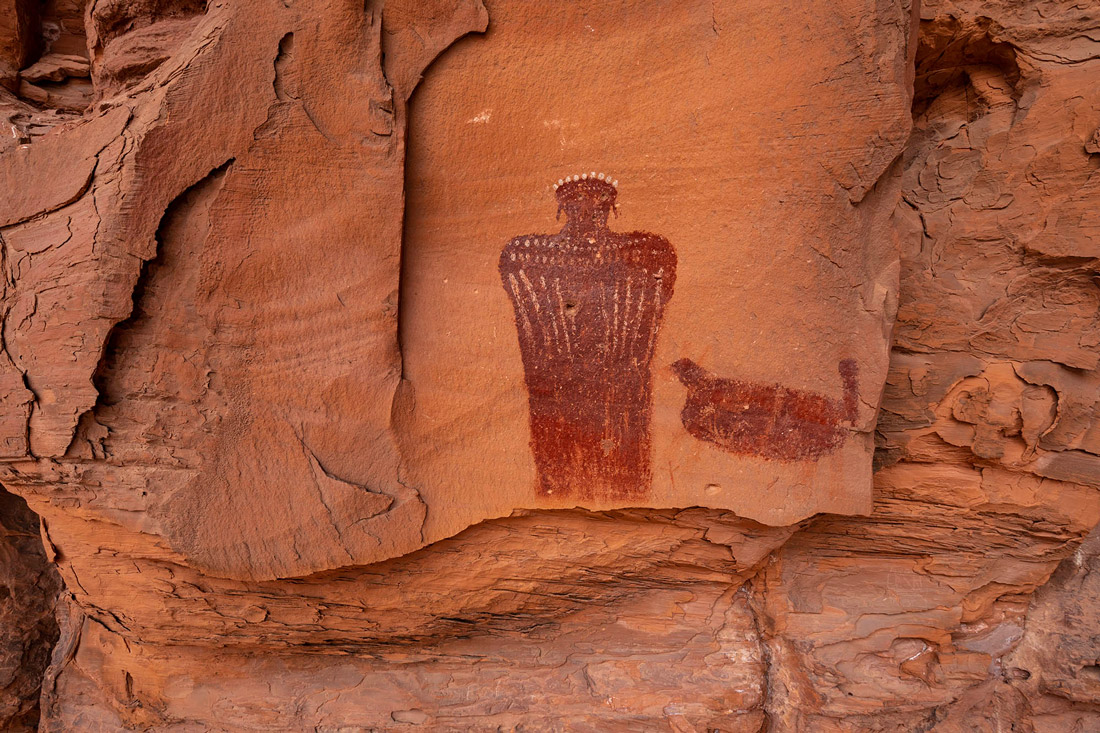 Special thanks to Kamilo Bustamante for his wonderful camera work and editing, and to Evan Unruh for his color correction and post polish of this interview.